San Jose a 5800m volcan and its neighbor Marmolejo 6100m was our fist stop in Chile.

Our plan was to take advantage of the good snow coverage on this side of the range and see the area before heading over to Aconcagua?  After that head south to see Patogonia.....  There was a problem... We were going to "see" allot but its really hard to get the feelings of an area when all your doing is "seeing".  The plan turned into a question. Why would we leave good skiing, good access, no crowds for the opposite when all it really had to offer was 800meters of height.?  It just didn't add up and we just never left. :)

I never anticipated the vastness and dramatic features that would surround these volcanoes.  The real story was that we didn't even have enough time for this one spot.  Equipped with natural hot springs up both valleys and roads going close to 3000 meters it was dream like.

Leading up to this area we spent a week in transit in and out of big citys/airports and to come up here was really that "born again kind of feeling."
San Jose was first on the list we had never been that high and were curious to see how the altitude would effect us.
We dug in at 3300 meters and contemplated whether or not it was possible to do the rest (2500 meters) and avoid heavy packs and a uncomfortable bivi up high.  We can always turn around at any time. 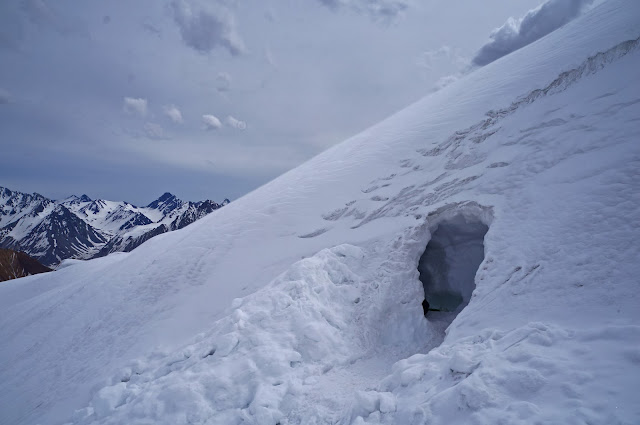 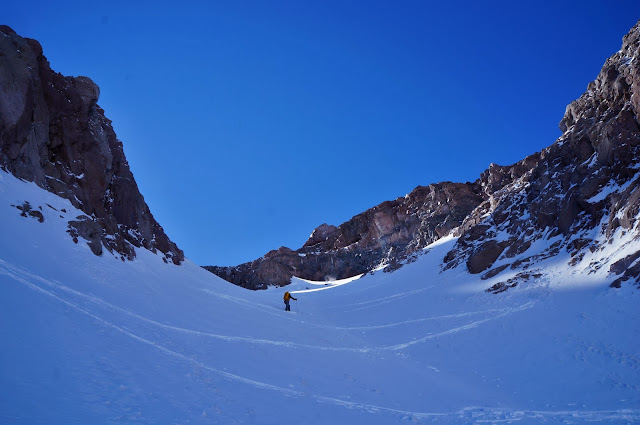 The fast moving clouds, a thin really blue sky all make for a much different feel but it wasn't until human balloons started floating up towards us and off to the summit that we really started to notice the spiritual energy. 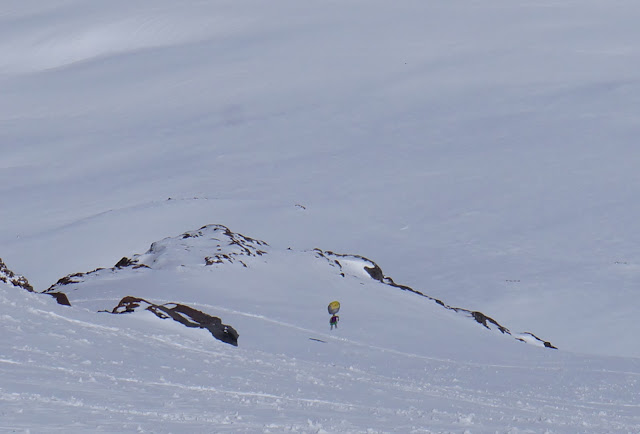 It felt like a great day to go for it so with the suttle hints from the mountains (or more likely a poor girl that lost here balloon) I kept skinning the last 1300 meters to see what 5800 meters felt like. Easier said then done..... I knew with out proper acclimatization it would be hard and it was.  As long as I felt good and had no headache or problems I kept going at it.  5000meters came the snow quality was not to be desired but still better then walking.   The smell of sulfur clued that the top was close and by this time I was walking the last few meters on wind scoured rock. 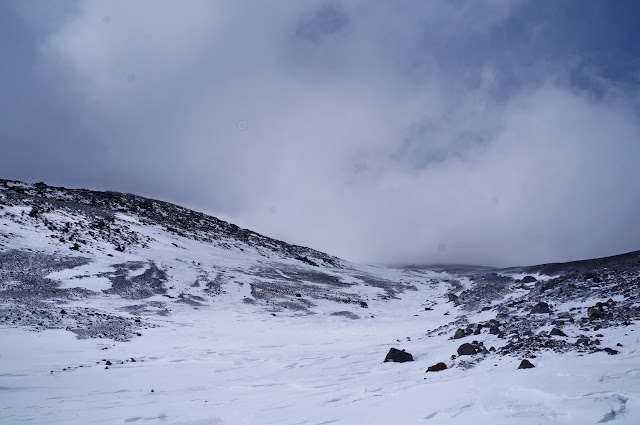 It felt good to accomplish the physical effort but it would have had to be super amazing aesthetic skiing to go up there again.  One thing that did catch my eye was some ice waterfall climbing at about 4000-4500 meters that could warrant a trip back up. 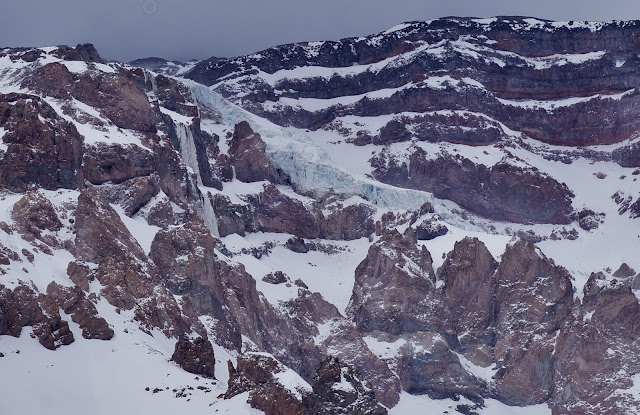 Silviculture workers get allot of opportunity to feel the suffer fest much like altitude dish's out but very rarely get a chance to spring ski.  Gloveless skiing on corn snow was our craving.  The best elevations at this time (Oct/Nov) were 2400-4000 meters and we couldn't complain with camping in a much more hospitable elevation. 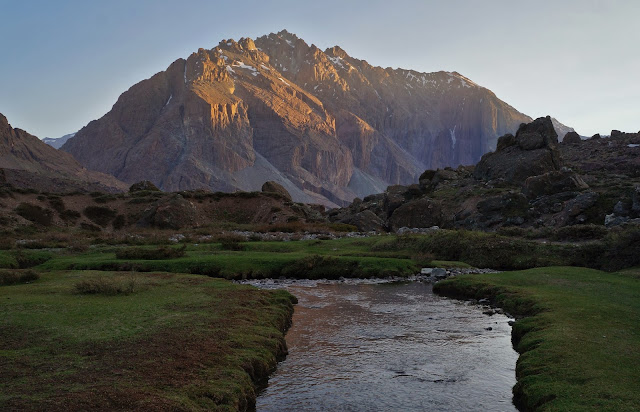 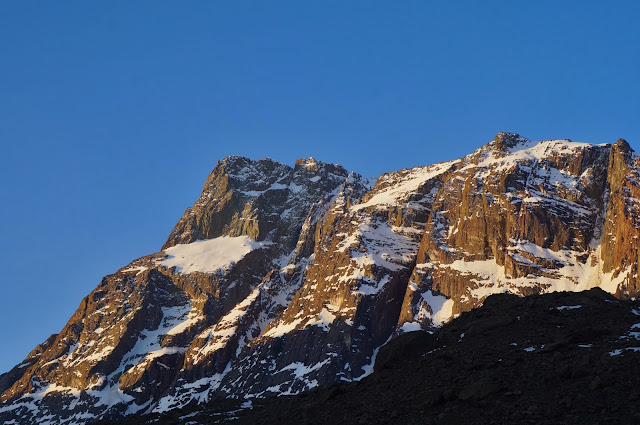 We stayed here for weeks exploring valleys, peaks, coulairs, a few nice steep faces and even a couple traverses.  In my head was a goal to never ski the same thing twice.  It wasn't hard... 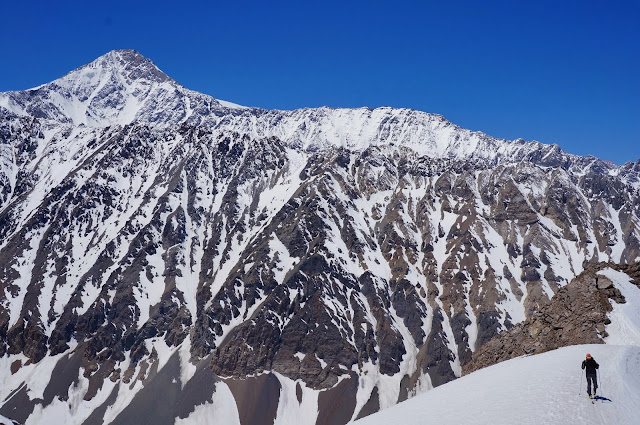 Every corner would bring new motivations, whats up there!, Whats over there!! does that go???

When it was windy it seemed the best option was valley exploration and skiing lee sw slops. 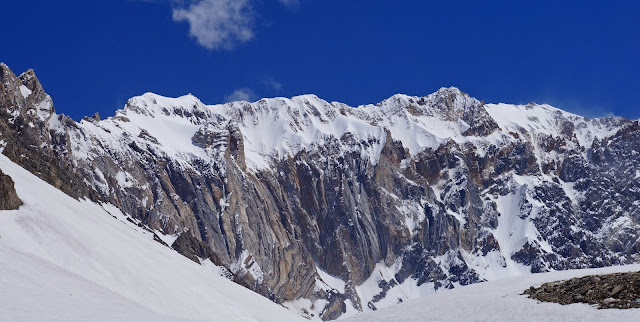 Every now and then penitentes would poke up but being early in the season they were small enough to ski over.  Smooth corn was very abundant. 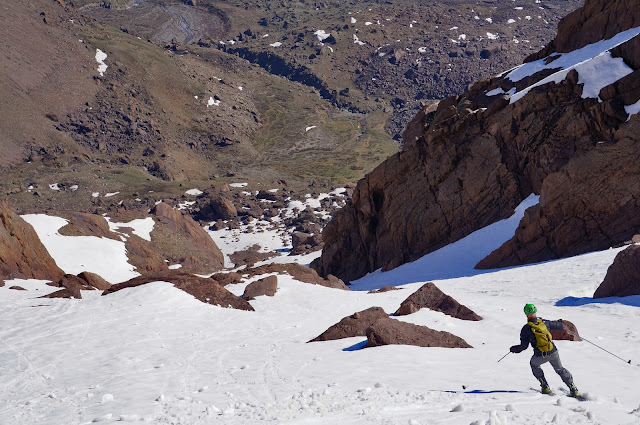 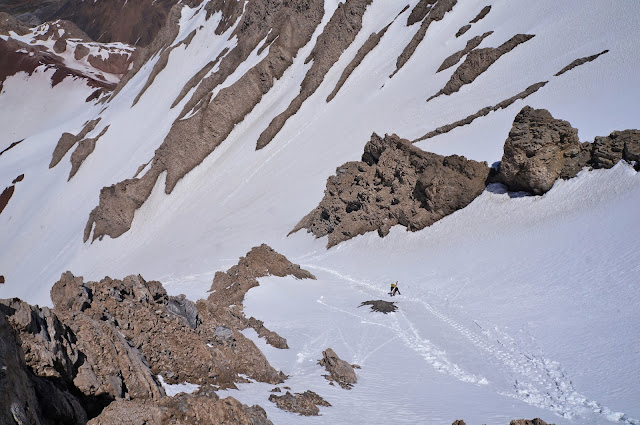 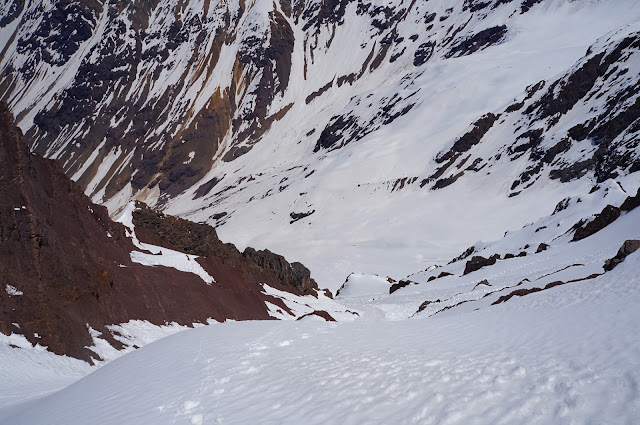 One thing that ended up slamming us especially me was the combination of endless sunny days and high elevation.  Over reaching was the name of the game but where water seeped out of the rocks would be micro climates to enjoy the spring and try to recoup. 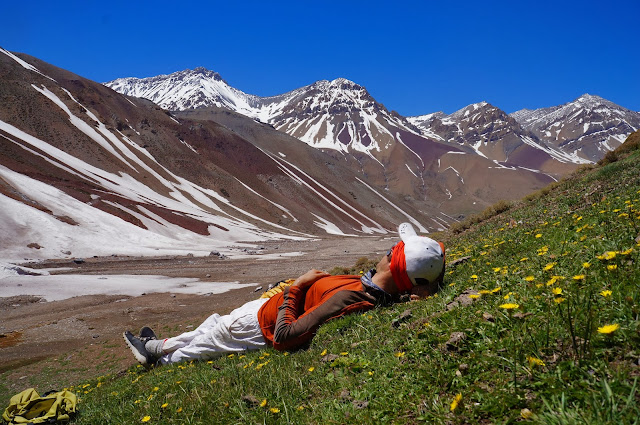 The rock quality varied greatly and I was stunned to find rock that was actually worse then the Canadian Rockies, dangerous just to look at....  Luckily it was contained and regardless of quality all rock was very interesting and opened your eyes to how explosive these mountains can be.  The rock below is called Tuff and is caused when the volcano blasts rock, ash, magma and other materials from its vent, this ejecta travels through the air and falls back to Earth in the area surrounding the volcano.
Luckily for the city of 4.5 million people down stream and those living on the volcano it has seen very little activity since Santiago was founded in the 1500's.   Some scientists theorize that despite the lack of activity there is a possibility that it is close to an explosive eruptive cycle, with characteristics similar to the eruption of Pinatubo (Philipines), where no eruptions had occurred for 600 years.
Personally I was more worried about kissing bugs down lower in elevation and really felt comfortable in this beautiful place.  That's not to say its with out challenges.  High UV's and lots of wind at times will wear through the thickest of skins. 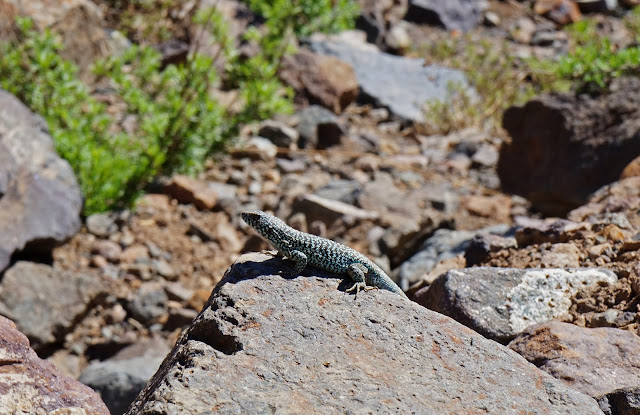 Beta: (what I gained anyways)

Flight time to Santiago from Vancouver: 14 hours + layovers (long haul)
Cost of living in Chile: Slightly cheaper then Canada.  Buying food at local markets highly recommended for fruit and produce.
Getting into the country: No prep work necessary for trips under 90days you just have to pay $125 at customs to get in. (note different story for Argentina)
Camping: Up in the high valleys you can camp anywhere for free.
Rental Car:  We rented a car for 41 days it cost us $1500 Canadian (note we didn't bother with getting excess insurance as it cost about the same as the excess ($1000) when renting for 41 days).  I would recommend a 4x4.  We really pushed the limits of where a car should go its really more suitable to a 4x4.  Forging rivers lots of ditches on long rough gravel roads.   However for accessing Volcan San Jose its totally doable with a car but if you want to get to the back of the valleys especially the north branch its rough.
Towns up Cajon del Maipo: The last for stocking up on supplies gas ext is San Jose De Maipo after that its limited.  Lo Valdes is a small town and the highest up the road.  We spent our first couple nights at a very nice rock castle called Lodge Placaroja.  The owners are very welcoming and have lots of knowlege of the area with topo maps on the wall ext.  Great place to shake off the jet lag and get antiquated with the area.

Cost of hotels,cabanas ext//  We found that it was around $30-50 pp to get a good bed for the night.  There were some cheaper options but you may as well camp.  San Jose De Maipo has a couple places that offer camping spots with showers ext// 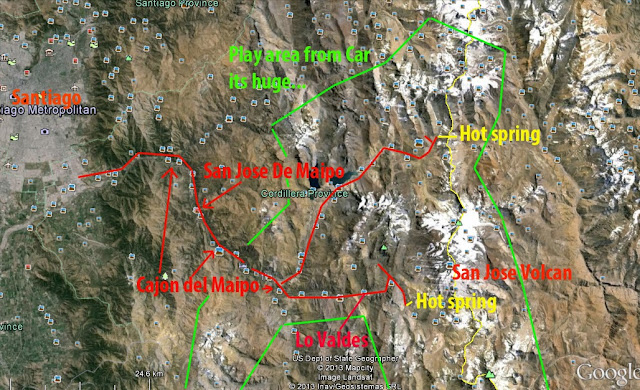 Over view of Chile

The north is mostly desert and high elevation not really good for skiing with the exception of certain volcaones at certain times of the year.

The South has a lower elevations and is more like the west coast of Canada.  It gets lots of snow and I have heard of people skiing late into November but it seems to be more limited and harder access.

Central Chile is where you will find the high elevation and snow mixture that makes for great ski mountaineering esp in oct/november.   Cajon del Maipo despite being so close to the epicenter of Chile has amazing access and very low crowds once you get off the beaten path.


So thats my small taste of Chile. We did end up driving south about 800kms to check out an active volcano called Villarrica and get our tourist fix.  It was beautiful but was really not much more then allot of people being guided up to see a bunch of hot sulfur gas. 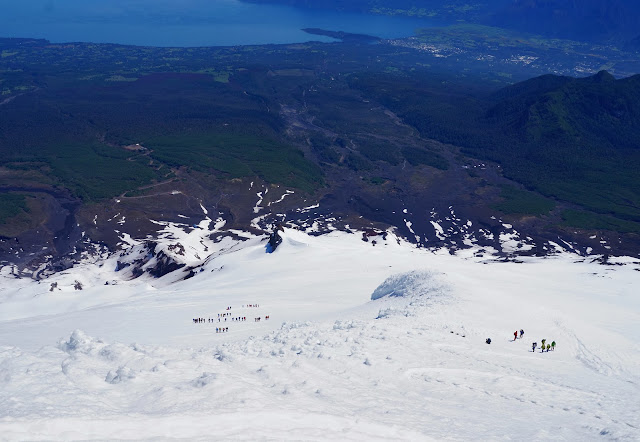 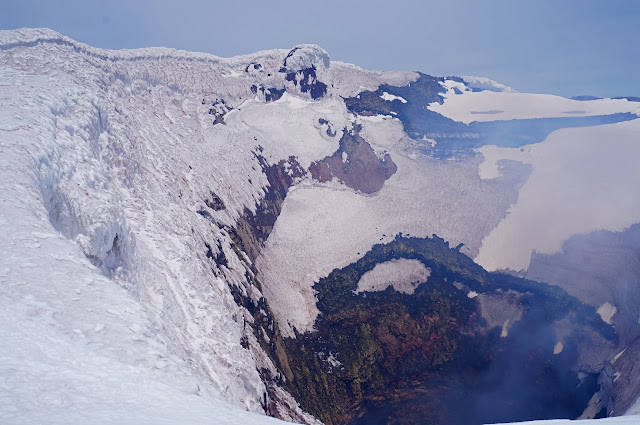 The area around it was stunning with lots of hot springs and it felt really refreshing to go there for a few days before heading out. 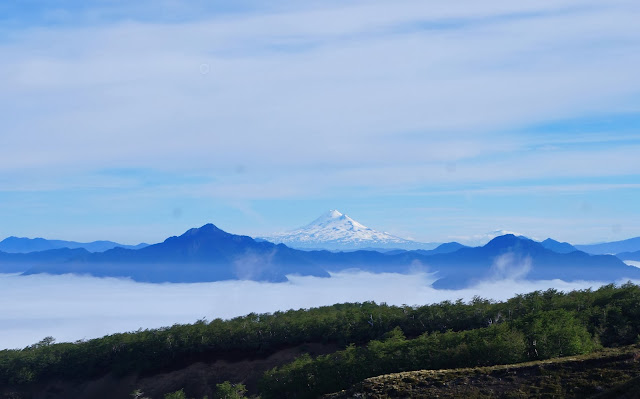 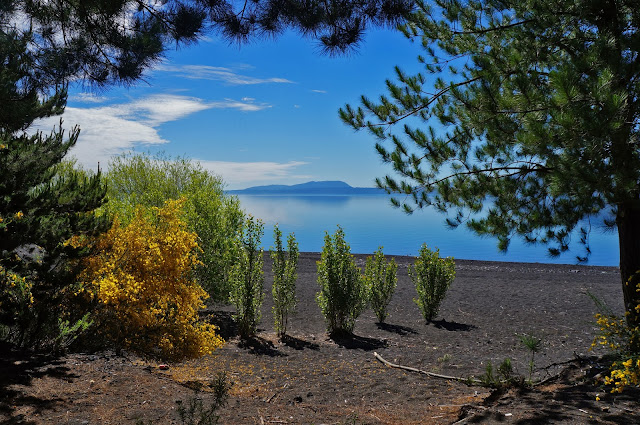 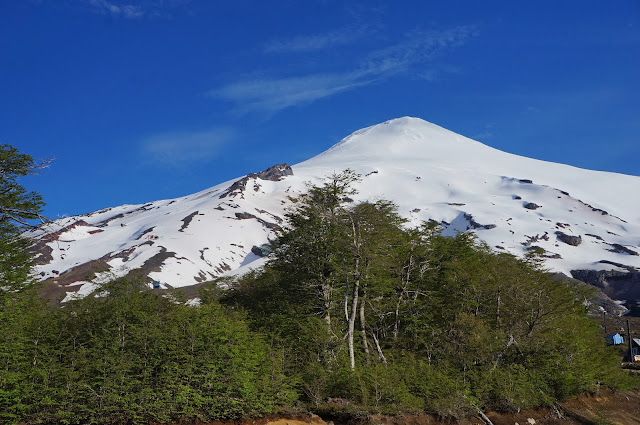 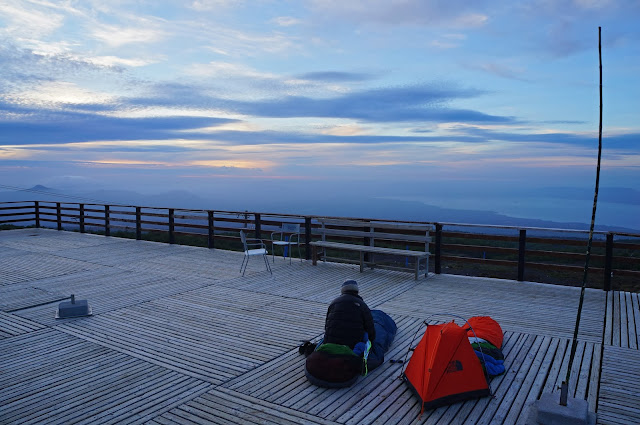 My SD card glitched and I lost a bunch of footage from Marmolejo highlighting central Chile but in hindsight this blog post is long enough.   Now back to our extended layover in Costa Rica where I finish battling a virus/parasite, hopefully in time for the Canadian winter :)