If your looking for a massive dark and cold undertaking look no further the north face of Robson in October is where you want to be! 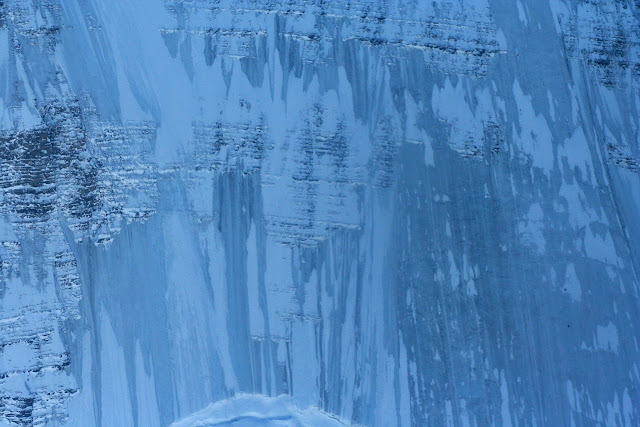 This thanksgiving my brother (Andreas) and I decided to work up an appetite and try a full loop of the mountain up the North Face and down the Robson Resplendent Spur.  Leaving the bikes at Kinney lake we planned to hike/climb to the base of the NF sleep, then up over and out the next day. 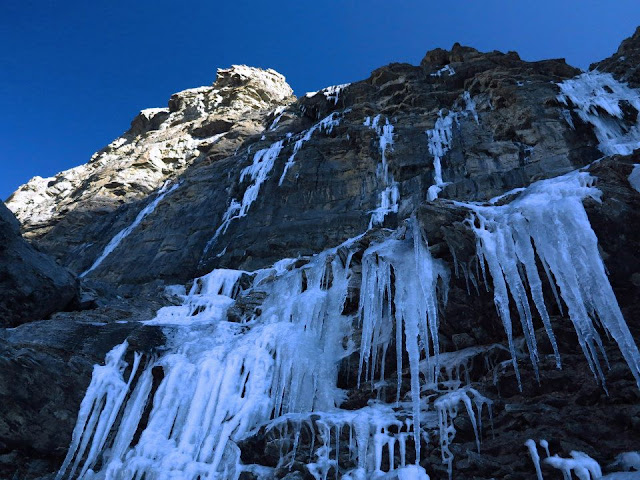 The first day went as planned we hiked up to Burg lake froze our feet crossing the river then climbed 800 meters up some fifth class rock covered in snow and ice. 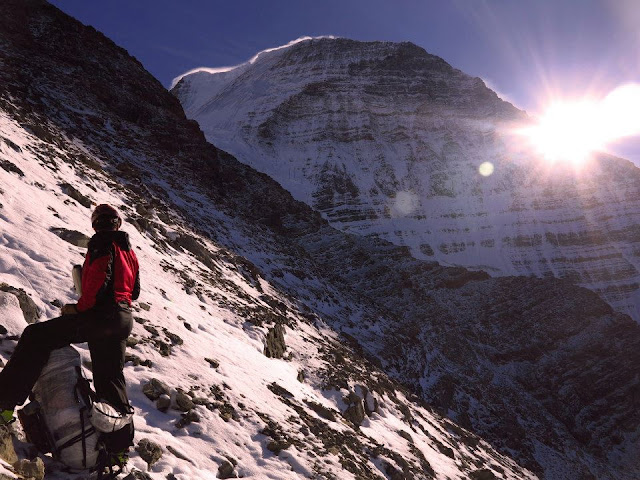 At around 4pm we were able to see the sun rise and shortly after we were melting snow on a rock buttress below the ever looming North Face watching it set. 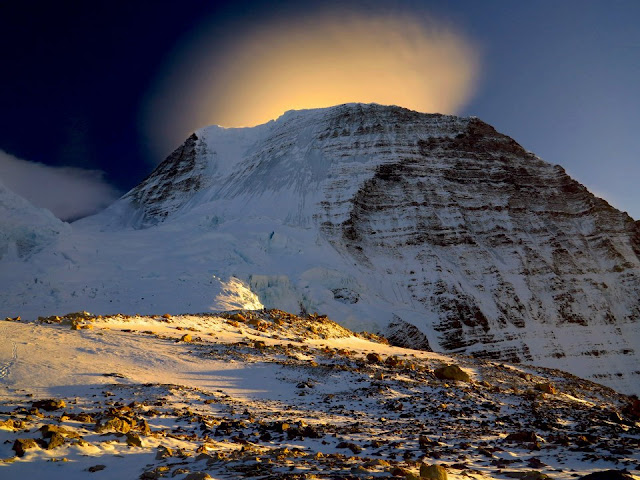 Up at first light we found our selves in a maze of seracs and crevasses with a breakable crust causing things to dramatically slow down.  It was evident that the glacier was now allot more broken then previous trip reports and photos had portrayed. 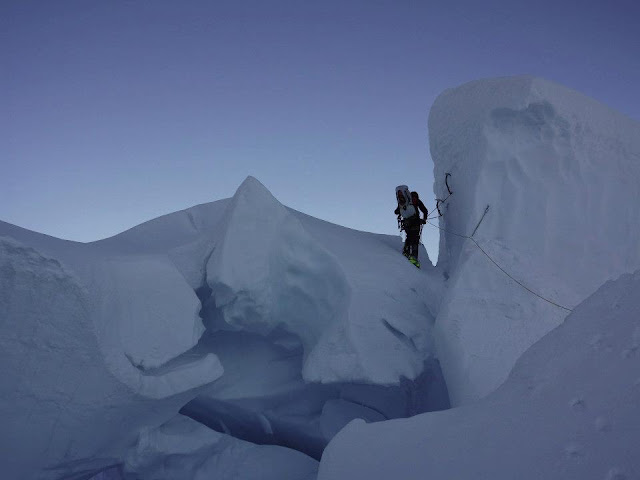 Watching the NF get lit up by the morning sun we knew we were alittle behind schedule and this day was likely going to turn into two. 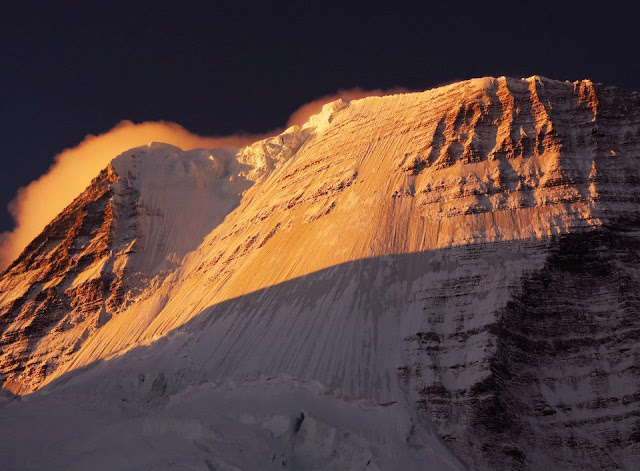 Stopping at the base to suit up, hydrate and fuel up one could not hold back the excitement towards the 1000 meters of ice waiting to be climbed.  Starting up the face things went smoothly until we started to hit big sections of brittle ice that would shatter like glass.  The ice underneath was good but this slowed our placements and forced us to go up in a traversing manner to out flank the falling ice.  Making our way up we watched a huge serac break off covering a big section of our tracks and running farther then expected with chunks of ice skipping over crevasses breaking bridges and filling them with debris.   Time seemed to be ambiguous but with fading light we knew we had to keep pushing to hit the crux on the emperor ridge before dark. Part way up Ken Smith from Edmonton happened to be flying around the mountain and was able to take a couple cool shots of us. 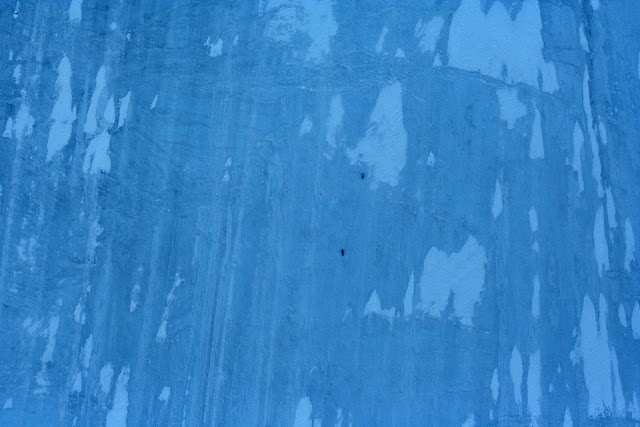 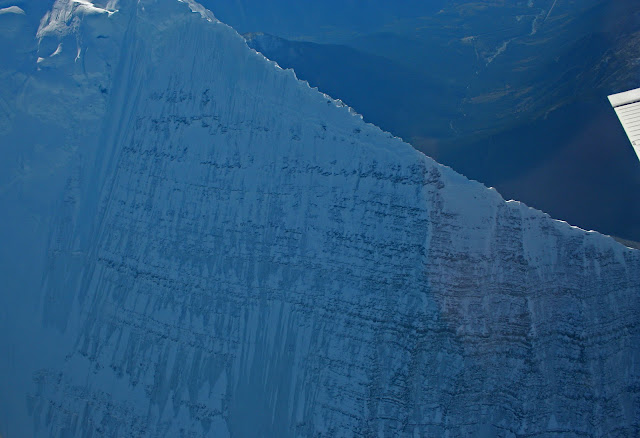 Placing one screw at a time on our running belay we started to make good progress and after about 8 hours we had hit the steeper mixed climbing sections. It was at this point that we noticed how much time was getting eaten up and by the time we crested the ridge we were at sun set flooded by a sea of gold spanning the whole SW face. 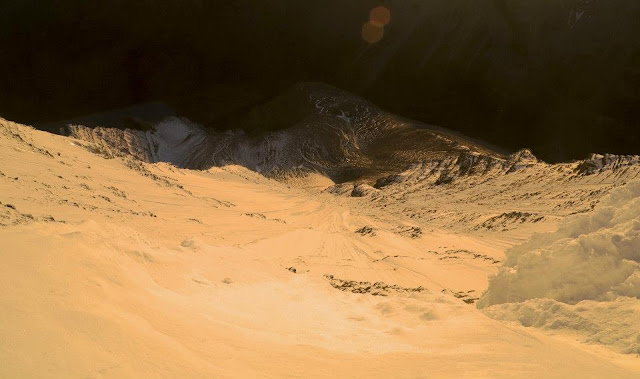 From here it was very dramatic as we carfully weaved our way around over and under giant double corniced gargolies with the dark NF on one side and the bright brilliant SW on the other.  Forced into some pretty precarious positions I think both of us were hoping to fall into the light side if we needed to break the others fall. 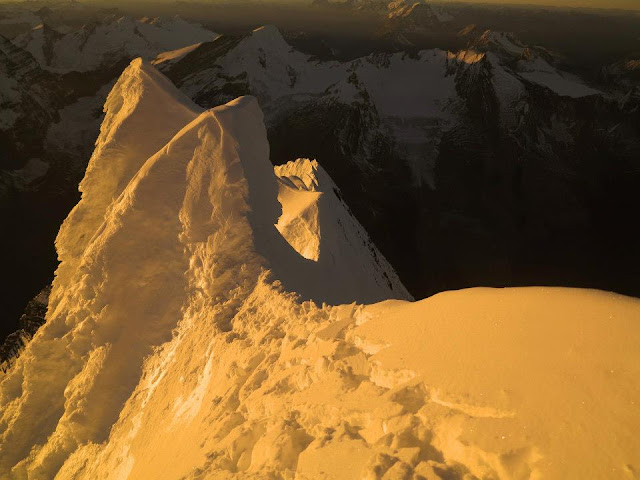 Finally the summit was in sight and with it came some very intense winds making our stay on the short side.  Strapping on headlamps and some extra layers we headed down in search of some softer snow to dig a cave. 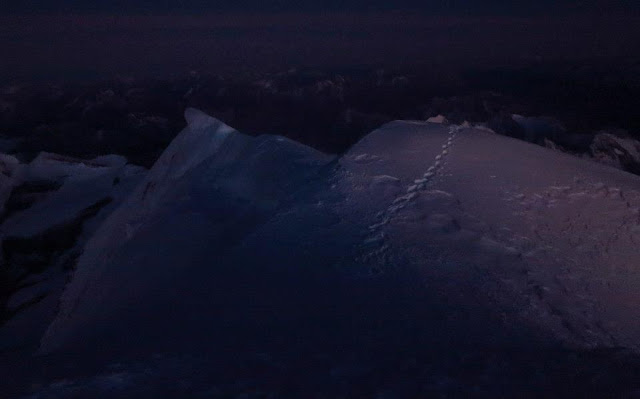 Stumbling down the summit ridge through the dark with cold piercing spin drift I was happy to have been up there the week before.  Ending up on top of the Kain face we found a more sheltered spot to dig in.  For a couple hours we made some water cooked some food and got horizontal until the light was on the horizon. 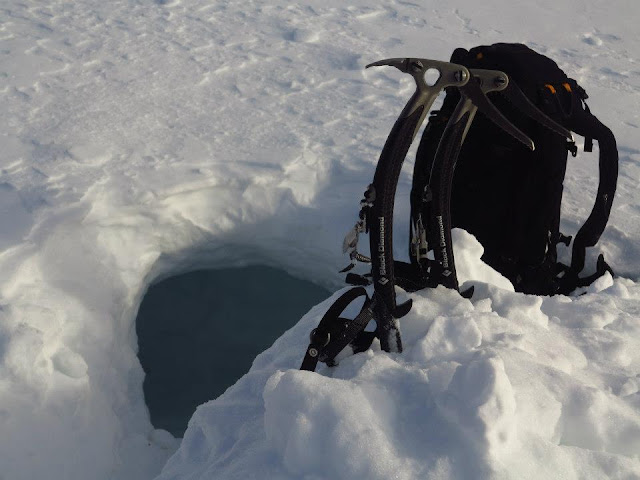 We continued the rest of our journey down climbing the Kain face and navigating a white out on the dome through more breakable crust.  This brought us to the Robson Resplendent ridge where we noticed we were following very fresh wolverine tracks.  It almost seemed fitting at this point and a stand off with a wolverine seemed like a pretty fair fight considering both of us were armed with two ice tools and crampons. (haha yah right...) 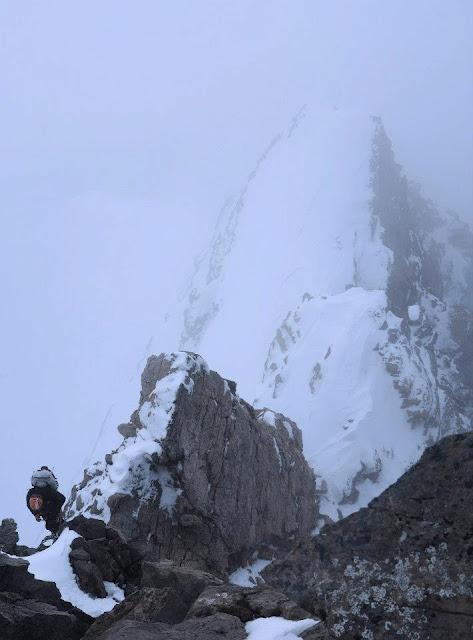 This seemed amazing to me that this wolverine actually had a habit of scouring the higher reaches of Robson to find the body's of perished climbers.  Having read about accounts where parks rescue would follow the wolverine tracks leading to the body we hoped that this was not the case. 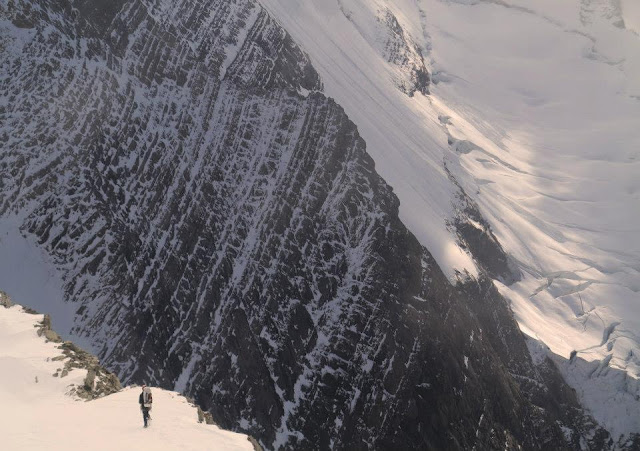 Luckily from what we gathered the wolverine was just on a patrol and had made his way back down the glacier leaving us free to head down the rocky spur through some goat trails to the valley bottom and our long awaited bush whack back to the bikes at Kinney lake.  Once we got back to the bikes we for the first time in a couple days were able to reflect on what just happened.  It was an amazing journey from start to finish, some quality bro time and an adventure that will last a life time.